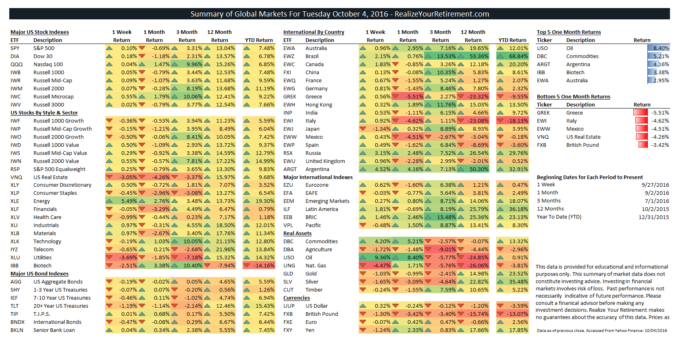 US markets were fairly flat over this past week, with the Energy sector by far leading other sectors in the markets with a 5.49% gain. This was largely due to optimism over OPEC oil productions cuts and the subsequent gains in oil prices that are assumed to follow.

International stocks fared far better over the past week. Of international markets, emerging markets were the standouts with Argentina (4.52%), Russia (4.15%), and Brazil (2.96%) rallying the most.

I’ll continue this refrain as long as we’re at the top of the markets. It’s easy to become over-allocated to stocks when markets are making new highs and the volatility of the last year is seemingly in the rear-view mirror. However, in times like these (when markets are near their highs or reaching new ones) risk is at its greatest, so it’s important to maintain a balanced outlook in your portfolio.

When volatility increases, as it has in the past few weeks, it’s best to make small changes to your portfolio, with each change moving your portfolio to a more comfortable allocation or to adopt a strategy that does so automatically. Large changes often lead to regret and poor market timing.