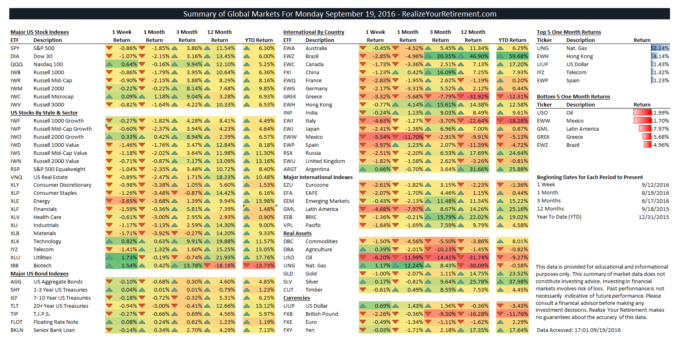 Equity markets around the world had a shaky week due to concerns over the interest rates central banks, such as the Federal Reserve, intend to target.

US markets were mostly down this past week, with the Energy sector taking the largest hit with a 3.65% loss. However, the Utilities sector bounced back a bit with a 1.73% return over the past week, after having lagged other sectors in recent weeks.

Bond classes were also hit again this week due to some renewed uncertainty about the Fed’s interest rate policies. The majority of bond asset classes were close to flat or down over the past week.

The Fed is set to meet on this Tuesday and Wednesday (September 20-21) to determine whether they will change interest rate policy for the US this quarter. The expectation is that interest rates will stay at their current target until at least December 2016. However, there is a (small) chance the Fed may increase its interest rate targets in an attempt to regain some of its lost credibility and to show that it is still in control of interest rate policy.

When volatility increases, as it has in the past few weeks, it’s best to make small changes to your portfolio, with each change moving your portfolio to a more comfortable allocation. Large changes often lead to regret and poor market timing.