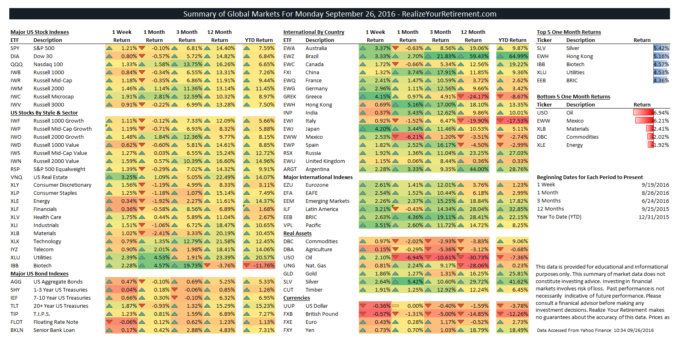 Last week equity markets were down going into the Fed’s interest rate policy meeting before rallying on the news that interest rates would remain the same.

US markets were mostly up this past week, with the Utilities and Real Estate sectors rallying the most with 2.39% and 3.25% returns respectively.

Bond classes rallied over the past week due to the interest rate targets of the Federal Reserve remaining unchanged for September. Out of the core bond asset classes, 20+ Year Treasuries (1.87%), T.I.P.S. (1.23%), and 7-10 Year Treasuries (0.66%) had the highest returns.

I’ll continue this refrain as long as we’re at the top of the markets. It’s easy to become over-allocated to stocks when markets are making new highs and the volatility of the last year is seemingly in the rear-view mirror. However, in times like these (when markets are near their highs or reaching new ones) risk is at its greatest, so it’s important to maintain a balanced outlook in your portfolio.

When volatility increases, as it has in the past few weeks, it’s best to make small changes to your portfolio, with each change moving your portfolio to a more comfortable allocation or to adopt a strategy that does so automatically. Large changes often lead to regret and poor market timing.