The end of the year is around the corner and every news organization is spreading the alarm as the ominous sounding fiscal cliff nears.  Unfortunately, the explanations about the fiscal cliff provided by most news organizations are unsatisfactory and instead of clearing up confusion they simply cause more of it.

The Congressional Budget Office offers us insight into the fiscal cliff with a lovely infographic that can be found in full here.  I’ll break it down piece by piece throughout today’s article.

Where Are We Now?

Under current law, there will be an expiration of numerous Bush Era Tax cuts for individuals and businesses, which will cause higher taxes for the middle and upper classes.  The payroll tax cuts of 2012 will expire, the alternative minimum tax (AMT) limits will revert back to year 2000 values, affecting more of the middle class, and small spending cuts will take place.  All of these factors will work together to lower the budget deficit in 2013.

On the right in the picture below, we have the projected budget deficit if Congress chooses to extend current tax rates and prevent the spending cuts that are set to occur at the beginning of the year. 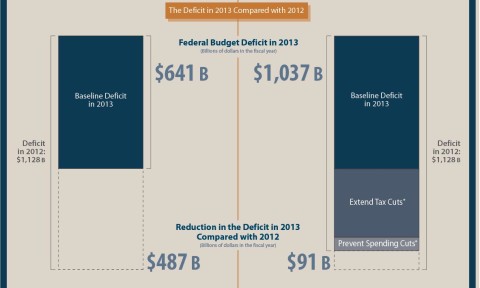 These two scenarios are both extreme examples and therefore we can expect the final decision to fall somewhere in between the two.  But let’s continue looking at the CBO’s infographic.

The budget of the last decade has left us with unsustainable spending and an ever increasing portion of our budget has been spent on debt service.  The current revenue and spending levels will cause dramatic long term harm to our economy if they are maintained.  It will be interesting to see how Congress attempts to balance spending cuts and tax increases so as not to send the economy into a lasting recession.

Budget and Economic Outlook: An Update