Since the Fed meeting on Thursday September 17th, markets have had quite a rocky ride.

Markets like this are incredibly frustrating. The sell off this past week was catalyzed by the Federal Reserve’s statement of apprehensiveness over global economic conditions and low inflation.

The biotechnology sector sell off last week can be traced to Hilary Clinton’s platform to reduce the high prices many biotech firms charge for their niche therapies. Many biotechs will acquire another company’s treatments and then raise the prices by several hundred to several thousand percent because they have a monopoly of the treatment. By taking aim at this practice, investors became spooked about the future prospects of many biotech revenue streams, which initiated the massive sell off of biotech last week. 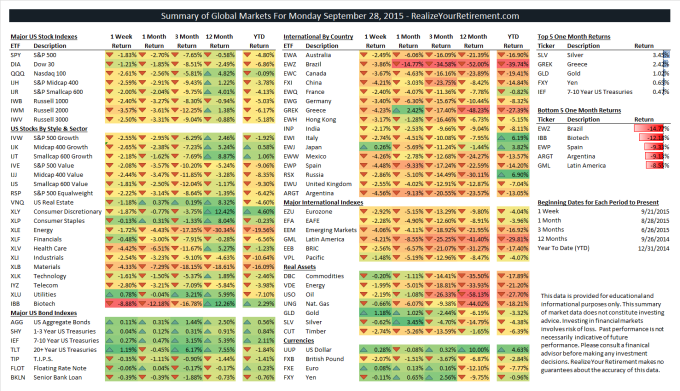 The current correction is hovering around a 10% loss, some styles and sectors have been hit harder than others. Weakness in both global equity markets and alternatives, such as commodities, have made this current market more difficult than previous correction over the past few years. Assets that typically act as safe havens and increase in value during periods such as this, like long treasury bonds and commodities have each had their own issues.
The Fed is still driving the markets. The Fed’s action, or more precisely, inaction, when it comes to interest rates has caused tremendous short-term uncertainty in the bond markets, which is why we’ve seen a large amount of volatility in both the bond markets and stock markets simultaneously.
The next chance for an increase in rates is likely in December. Read my article from last week to better understand why the Fed’s actions are affecting the markets and what their actions could cause going forward.

Expect continued volatility in the weeks ahead, with a potential for a change in the dynamics of the market (for better or worse).