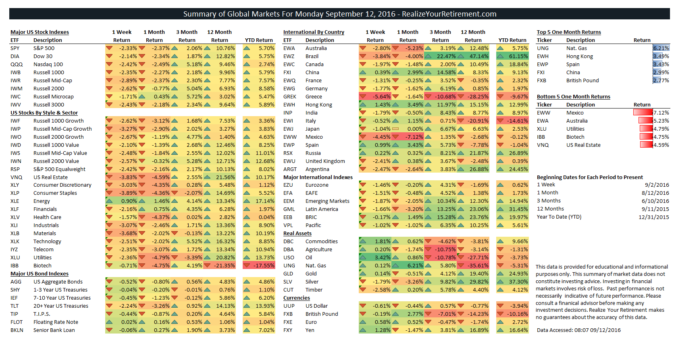 Bond classes were also hit due to the remarks about raising interest rates from the Fed. Long Term Treasuries were walloped, down -2.24% for the week while the remainder of returns ranged from  -0.44% for Inflation Protected Securities, -0.45% for Intermediate Treasuries, -0.52% for the broader bond market. Floating rate securities managed to eek out a slightly positive return at 0.02% for the week.

Commodities were the strongest asset classes. Commodities as a whole increased by 1.81% for the week, largely due to Oil prices which were 3.42%.

When volatility increases, as it has in the past week, it’s best to make small changes to your portfolio, with each change moving your portfolio to a more comfortable allocation. Large changes often lead to regret and poor market timing.