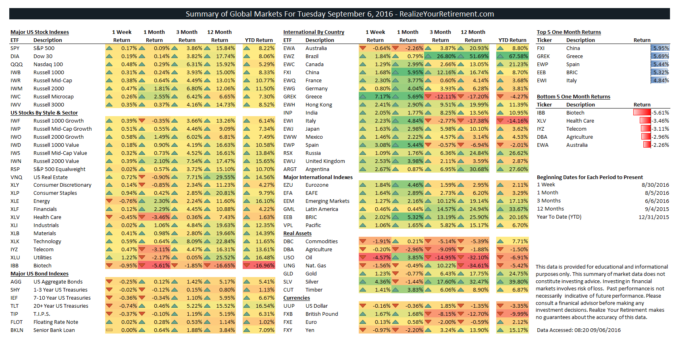 US equity markets were flat over the past week, with gains of only 0.17%. The Consumer Staples and the slightly rebounding Utilities sectors lead US Markets with 0.94% and 1.22% weekly returns respectively. Biotech continues to get pounded with -5.61% returns for the month and -16.96% year-to-date returns.

Bond classes have also declined a small amount over the past week. Returns ranged from -0.74% for Long Term Treasuries, -0.37% for Inflation Protected Securities, to -0.25% for the broader bond market.

Silver has rebounded a bit over the last week. Last week Silver was the biggest loser for the past month and this past week it has said the second largest gains. The best performing assets include emerging markets countries, with China, Greece and Spain taking the top spots.

Rebounding strongly after weakness that lasted for several weeks. While China has been positive over the past 12 months (16.74% returns), Greece, Spain, and Italy have all negative 12-month returns (ranging from -6.94% to -17.38%).