In Deal With Didi In $35B Deal, Uber Frees Itself to Expand in Other Markets

Uber China merges with its biggest competitor in China, Didi. Didi has dominated Uber China by gaining 80% of the Chinese ridesharing market, but neither company has yet made a profit in the region.

Uber China investors will get 20% of the new company.

Two of Elon Musk’s companies, SolarCity and Tesla Motors, have moved ahead with their planned acquisition deal. The deal was voted through even though Elon Musk and other shareholders with major holdings in both companies did not vote. SolarCity will be acquired by Tesla for

The Unbearable Transience of Alpha

A great article from Tammer Kamel, founder of Quandl, (an awesome financial data platform), about how the generation of alpha (excess returns over the market) changes through time. Early generations saw information advantages through insider trading and access to any financial data. During the 1980’s and 1990’s we saw computers and algorithms take the lead. And now with the internet of things and the monitoring of everything, we may be entering an age where processing novel data sources once again gives investors an information advantage.

The Cheapest Generation – Why Millennials aren’t buying cars or houses, and what that means for the economy

An article from a few years ago, that still worth a read. Discusses how the buying habits of Millenials will shape the economy in the years to come.

In a nutshell, as industries become augmented by technology and thus become information technology industries, they price of goods and services plummets, Technology can improve at an exponential rate, whereas physical goods tend to only progress at a slower linear rate. We’re on the cusp of some big changes thanks to where we are on the technology curve. A great primer by X-Prize Founder Peter Diamandis on the dematerialization and demonetization of many goods and services that we’re set to experience over the next 20 years. I plan to write a lot more on this in the future because the paradigm-shifting technologies that are out there and arising faster than most realize. It’s better to be on the cutting edge of technology than to be ambushed by it. 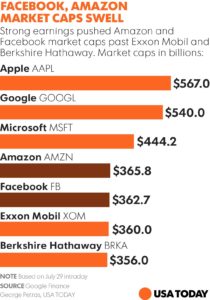 Humans once opposed coffee and refrigeration. Here’s why we often hate new stuff.

How doctors die. It’s not like the rest of us, but it should be

Drowning In A Sea of Information