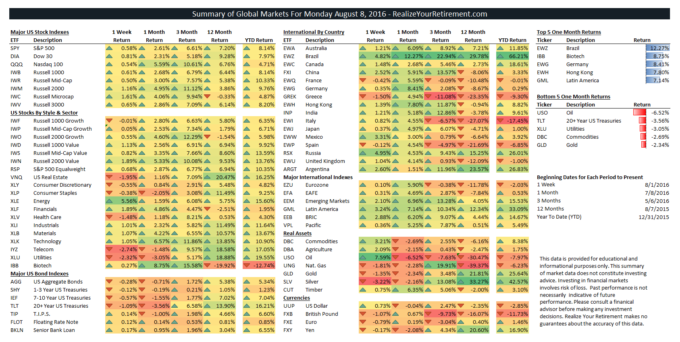 45%
Economic Strength Index (ESI
The ESI ranks indicators of the US economy on a scale of 0 to 100 (worst to best.)

Year over year growth rates amongst the indicators underlying the ESI are in the 21st percentile (0 to 100 scale). This, combined with the current value of the ESI imply that we may see more softening of economic numbers to come.

In the past week we’ve seen some softness in the defensive sectors of the US markets, which investors had piled into earlier in the year due to their stability during recent fluctuations.

Meanwhile there has been significant rallies in several emerging markets such as Brazil and Russia.

It’s easy to become over-allocated to stocks when markets are making new highs and the volatility of the last year is seemingly in the rear-view mirror. However, in times like these (when markets are reaching new highs) risk is at its greatest, so it’s important to maintain a balanced outlook in your portfolio.