The American Taxpayer Relief Act of 2012 (ATRA) implements a number of changes to our nation’s tax system. This much needed bill avoided sending American taxpayers over the fiscal cliff, which would have caused large tax increases for most taxpayers.

We’ll cover each item in turn, but first let’s go over what’s on the mind of most Americans, the new tax brackets.

1. Changes To The Marginal Tax Brackets

ATRA maintains the current marginal tax rates for most Americans. These had been set to revert to their much higher pre Bush Tax Cut rates. Instead, Congress made the current rates permanent for 99% of taxpayers and raised taxes on the top 1% of earners by creating a new 39.6% tax bracket.

The phase out of itemized deductions was already scheduled due to the lapse of the Bush tax cuts.

The Pease limitation reduces Total itemized deductions by 3% of excess income over a threshold. The threshold amounts are $300,000 for married couples and $250,000 for individuals. These thresholds will be indexed for inflation.

The personal exemption phaseout reduces the total of all your exemptions by 2% for each $2,500 of taxable income over a threshold. This is the same as the Pease limitation threshold for itemized deductions, $250,000 for individuals and $300,000 for couples. Basically, the net impact of these reductions increases an individual’s marginal tax rate by around 1%. 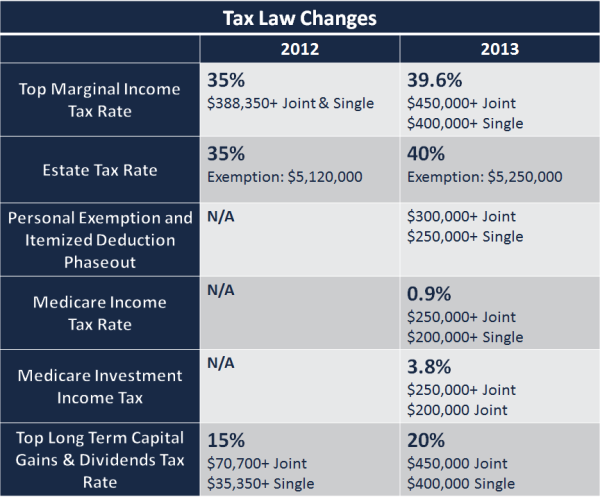 Obviously that would have been a disaster for members of the upper middle class that have a net worth between $1-$5 million.

Instead the estate tax will remain at the $5 million level for 2013 and be indexed to inflation. Instead of a 55% tax rate, the estate tax rate will increase from 35% to 40%.

Now we also have a boon for high net worth investors. The portability of a spouse’s unused estate tax is made permanent. That sounds great, but what exactly does that mean?

Consider the following example under the old rules, before 2010.

Let’s assume the estate tax exemption is $5 million, and an elderly couple has a $10 million estate. If the husband were to die and leave $1 million to his children and $4 million to his spouse, he would still have a $4 million exemption because assets pass to spouses tax free.

Under the old rules the $4 million he didn’t use would disappear and when his wife passed with $9 million she could only use her exemption of $5 million, so she would be slapped with the estate tax fee on the remaining $4 million. This created the need for bypass trusts which allowed the first spouse to pass to use their whole exemption, instead of losing out on it and paying Uncle Sam “his fair share.”

Under the new rules the unused portion would be added to his wife’s total exemption. This allows her to exclude the total $9 million from her estate instead of the standard $5 million

In the past if you were in the lowest tax brackets you would pay 0% on long term capital gains and qualified dividends and everyone else would pay 15%. Well, with the fiscal cliff deal, there’s good news for most Americans, the 0% and 15% tax rates are made permanent.

However, there is bad news for investors with high income. Those individuals that fall in the 39.6% tax bracket will see their long term capital gains rate and their qualified dividend tax rate jump to 20%.

But there is a bright side as well, the regulation that allowed qualified dividends to be taxed at the capital gains rate instead of your ordinary income tax rate has been made permanent.

One more piece of bad news though, those hit with the new 20% tax rate will also be hit by the new 3.8% Medicare tax, so their top tax rate of long term investments will be 23.8%.

When the alternative income tax was set up in the late 1960’s, it was not indexed for inflation. For years Congress has patched the alternative minimum tax, a tax for high income earners, every year instead of indexing it to inflation. Finally, in this bill Congress has indexed the AMT for inflation and increased the exemption amounts to $78,750 (couples) and $50,600 for singles. This is largely due to the fact that the AMT had been set to impact over 30 million middle class families, instead of the usual 3 million or so. Nonrefundable tax credits are also made permanent for use against the alternative minimum tax.

Individuals who are employed at companies that offer a Roth version of their 401(k) plan are now allowed to convert their 401(k) to a Roth 401(k) within the same plan. Previously, individuals wishing to convert to a Roth account would have to roll their 401(k) into a Roth IRA. This was only available to those eligible to make a distribution out of their retirement plan. This change offers excellent tax planning opportunities for those that wish to receive tax free distributions during retirement. I plan to write a post in the future on who an in service Roth conversion could be useful for.

Whew, well if you made it through this beast of a post on tax law, more power to you.