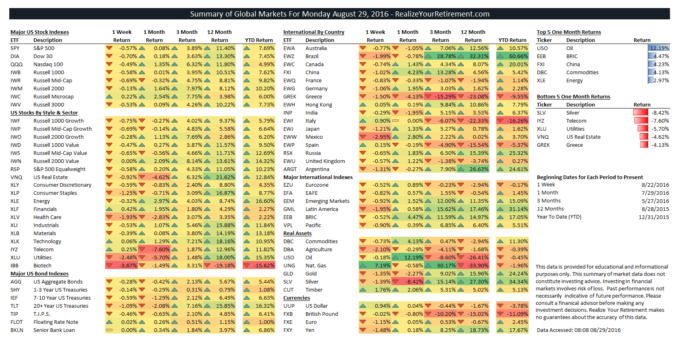 Silver has been the biggest loser for the past month, with Telecom, Utilities, and Real Estate (all income-oriented stock classes) right behind it. Telecom and Utilities have continued their decline,after having surged earlier in the year.

US equity markets end the week slightly down with the S&P 500’s return of -0.57%. Investors who have previously been heavy in defensive stock sectors such as Utilities and Telecom, and US real estate, have continued rotating out of those sectors.

Federal Reserve Chair Janet Yellen has also  impacted markets with her commentary that the Fed is closer to raising rates this year. If the Fed should raise interest rates this year, many are eying a December increase.

Bond classes have also declined over the past week. Returns ranged from -1.09% for the Long Term Treasuries to -0.28% for the broader bond market.