Uber has already lost more than $1.2 billion this year

Why Uber Is Losing Money Faster Than Any Tech Company Ever

Despite its ubiquity and massive valuation, Uber is losing a lot of money. $1.27 billion in the first half of this year. Most of the losses are due to the payments made to drivers, these include sign-up bonuses subsidizing drivers when Uber lowers prices, and guaranteed fares in some cities. Since drivers are its most expensive The solution may be to get rid of drivers and move to an autonomous fleet, something they are already testing and working towards so Google doesn’t clean their clocks when it releases its eventual service.

If you order an Uber in Pittsburgh you might get an autonomous car to pick you up. Uber has teamed up with Volvo and its own recent autonomous car company acquisition Otto to begin automating its fleet. The ride in an autonomous test car will be free for now and you will be accompanied by two engineers in the front seat who are monitoring the car and will take over in the event the vehicle needs human intervention. Uber has made a pact with Volvo to get the first fully autonomous car (sans any driver/engineer) on the roads by 2021. It’s going to have some tough competition too, as Google is at the forefront of autonomous driving tech and will likely manufacture its own autonomous vehicles and deploy its own autonomous ride-sharing service within the same timeframe, with several other car manufacturers trying to follow suit.

Retirement-Planning Assumptions: Yes, You Can Be Too Conservative

While having a smart allocation with which you are comfortable riding the ups and downs the markets is important to a retirement plan, oftentimes retirees can get a bit carried away with conservative investing. This includes mistakes such as assuming Social Security won’t be there for you at all (which if you’re nearing retirement today, worst case scenario is probably a payout of 75% of your promised benefits after the trust fund is exhausted in the early 2030’s) and having a withdrawal rate that means you won’t ever spend down your retirement savings (you need to be in a place you feel you can spend your savings confidently, a good financial plan with smart investment strategies will get you there).

The Great Love Affair With Risky US Credit

European bonds are in a weird place. Several governments are issuing negative yielding debt and corporate debt has an average yield of 0.7%. By comparison, the yield on dollar-denominated debt is sky-high, with average corporate debt offering a yield of 2.8%, US bonds are going to receive continued downward yield pressure as demand for their yield continues to remain strong.

My Startup Generated Almost 2 Million in Revenue, so I Shut It Down

Whenever beginning a new start-up, it’s important to get the structural foundation of the business right, “you can’t pivot away from structural mistakes”. Most business ideas contain structural mistakes that make it difficult to create an eventually profitable business. Don’t fall in love with business ideas that don’t have empirical evidence to back them up. “Advice: don’t try to fix when you need to kill. Fixing and killing aren’t the same.”

“In light of the continued solid performance of the labor market and our outlook for economic activity and inflation, I believe the case for an increase in the federal funds rate has strengthened in recent months,” Yellen said in prepared remarks.

Fed Chair Janet Yellen has certainly been less than firm about when a possible rate hike will happen and what the Federal Reserve will need to see to go through with one. This murky roadmap of their rate hike plans is a result of a Federal Reserve board that is divided on the needs of the economy. She’s also opened the doors to broadening the number of assets the Fed can purchase during future recessions (e.g. Japan’s recent monetary policies). It’s difficult to say whether Federal Reserve action can even have an impact on long-term rates in this environment when several European nations have negative interest rates (which cause an increase in demand for US dollar denominated debt, thereby causing downward pressure on US interest rates).

This Planet Just Outside Our Solar System Is ‘Potentially Habitable’

Changes in the Leading Cause of Death: Recent Patterns in Heart Disease and Cancer Mortality

It seems that cancer is now the leading cause of death in 22 states, having seen a steady rise of deaths due to cancer since the 1950’s. 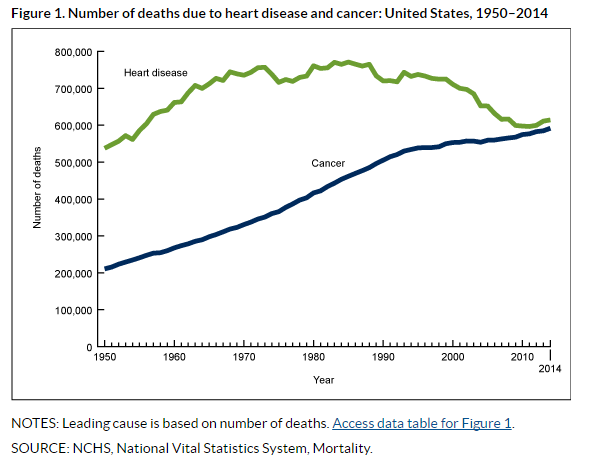