The biggest news this week has been the vote for Scotland’s independence, the Alibaba IPO, and the Federal Reserve’s remarks on managing interest rates over the next year. After Scotland voted “No” to independence and the Federal Reserve kept the “considerable time” before raising interest rates verbiage in its announcement, the markets have happily chugged along. Alibaba also raised a record-breaking $21.8 billion in an initial public offering this week, increasing almost 38% by noon earlier today after trading began.

The Federal Reserve tapered its bond buying program by a further $10 billion this month, with a final cut in October, which will end the years-long bond buying program. The Fed kept the “considerable time” before raising interest rates verbiage in the announcement,  but Yellen cautioned that the statement could be revised if the economy continues to improve. She further stated “There is no fixed mechanical interpretation of the time period”, which leaves the ultimate date for when the Fed will choose to begin raising interest rates remaining in flux.

Alibaba, the largest IPO ever at $21.8 billion, shot upward from $68 a share to around $98 per share by noon. As of 3PM the price has settled to around $91. Alibaba is simply a massive company, now valued at $231.7 billion, which is a larger market cap than Amazon and Ebay combined.

“The Retiree Next Door”: How Successful Retirees Stretch Their Savings (Yahoo Finance)

There are some great stories in here about retirees or soon to be retirees turning their finances around. One couple went from being $200,000 in debt and few retirement assets in debt to zero debt and a $250,000 retirement portfolio within just a few years.

Millennials Most Likely to Seek Financial Advice from Parents (ValueWalk)

The Great Fracking Forward: Why the World Needs China to Frack Even More (Wired)

Here’s a thorough piece from Wired about the state of fracking in China and how it may help with their smog problem caused by their heavy use of coal for energy. However, fracking may create some severe environmental impacts in agricultural communities who have no chance at recompense for the damages done to their communities. Furthermore, China may simply continue to use coal energy as well as shale gas derived from fracking to power its energy-hungry economy, rather than reduce the use of coal in favor of shale gas. 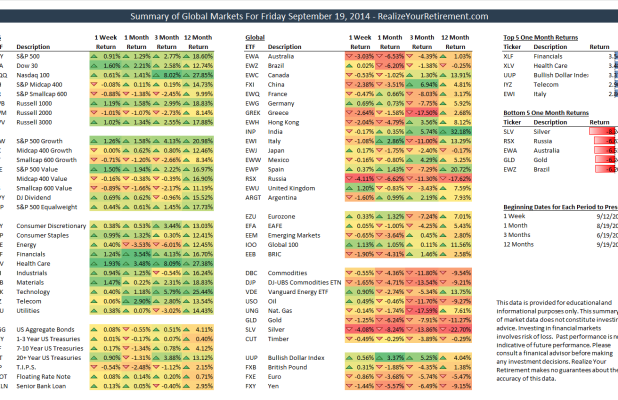