Markets have been falling this week and falling pretty hard. As you can see in the market returns summary below, the S&P 500 is down by 4.5% this week, which brings its 3 month return to -6% and the year to date return to -1.88%.Bonds have gained only a marginal return this week with US aggregate bonds up 0.7% for the week and 1% for the year.

Global markets have also fallen far this past week. Japan has fallen 7% this week and the Eurozone is down 5.6% for the week.

The weakness in the current market has been evident for the past 8 months, due to the sideways market pattern that we’ve been in since January. However, the trading pattern that the S&P 500 has been locked in has been breached, with the price of the S&P 500 dropping below its 200 day moving average on Thursday.You can see this in the chart above, wherein the price of the S&P 500 dropped below the 200 day moving average in teal. When this happens it typically marks the beginning of a change in market regime, from less volatile markets to more volatile markets with greater risk. The majority of losses in a market typically occur after the market falls below the 200 day moving average, therefore it’s often prudent to begin to reduce exposure to more risky assets at this point.

However, despite the 200 day moving average being breached, it’s no time to panic. A correction has been expected for quite some time due to the sideways motion of the markets. The markets have flirted with, but have not crossed this trendline since the summer of 2011 when we had a correction of around 20%.This may or may not be the start of the correction, we’ll have to wait and see however, a correction is likely to be just that, a correction before the continuance of the bull market we’ve been in since 2009.

A proprietary indicator that I’ve developed, the Economic Strength Index (ESI),follows around 30 different leading indicators of the economy and grades the economy on a scale of 0 to 100. Currently the indicator stands at 66%, a fall from its high reading of 93% in July of last year. So, the economy isn’t the strongest it’s ever been, but it’s not likely to fall into recession. As long as the ESI’s reading is above 50%, there is little cause for concern that a recession is likely to occur. So the current market turmoil is unlikely to be a catalyst for a larger economic slowdown.

In the event of continued falling prices, we’ll also be presented with a buying opportunity as many stocks that were previously expensive will become less expensive and stock prices that were already cheap with good long term fundamentals (I’m looking at you energy stocks) would become even cheaper. So for those of us who practice value investing, we’ll be able to invest in companies that have caught our eye at even more attractive prices.

(Continued after the summary.) 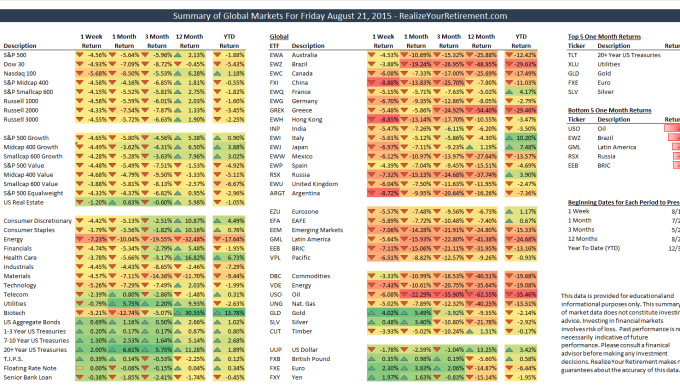 So, should a correction occur, stock markets will have more room to grow and will be less likely to stay locked in the sideways pattern that we’ve seen them in for the last several months. It will also give the markets the reset they need to continue the bull market we’ve been in the for last several years.