Last week was quite a ride for investors. The week stated out with the flash crash for ETFs and stocks on Monday, began rebounding on Tuesday and ended up slightly positive.for the week on Friday. Investors that did not follow their investment plan likely panicked and went to cash at the worst possible times. During chaotic moments in the market it’s best to stick to your investment plan. It’s simply easier to stick to an investment plan if the strategies you employ have built in risk management rules that kick in during a crisis, rather than simply buying and holding through it. 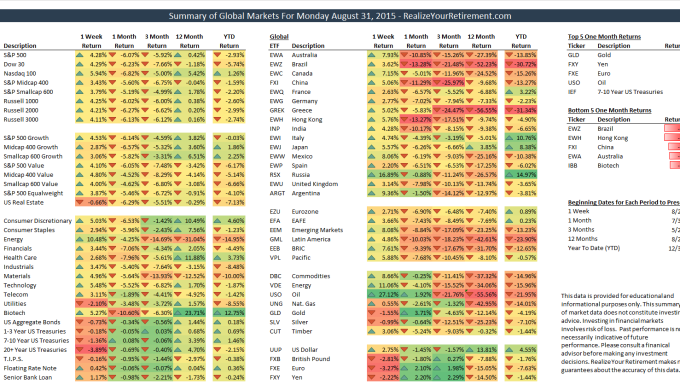 Last Week’s Flash Crash And The Volatility Ahead

That said, I’m sure the flash crash of ETFs and stocks last Monday caused many to question or abandon their buy and hold investing plan. That’s why I much prefer non-emotional mechanical investing strategies that have plenty of risk management checks built in. Statistically, it isn’t wise to panic sell with if you don’t have a methodology or gameplan to buy back into the markets (and the wherewithal to stick to it).

For those who reduced their positions in or hedged many of their risky assets after the S&P 500 crossed the 200 day moving average (as I noted on August 21st) there was plenty of cash on hand to invest on Monday when we were presented with an excellent buying opportunity. The flash crash allowed investors flush with cash to purchase ETFs and stocks at bargain prices as they became disconnected from their underlying fundamentals.Continued buying opportunities presented themselves throughout the week as the market began rebounding. There are still plenty of buying opportunities present in markets this week as the S&P 500 is still below its January value.

Volatility is likely to continue over the short term as well, so I would not be surprised to see markets bounce up and down over the next few weeks. The volatility of the past few weeks is likely to cause many institutional managers to hold more cash in their portfolios. Their selling (or simple lack of buying) may push down asset prices in the short term, leading to continued volatility.

The bubble activity that was seen in global stock and bond indices earlier this year has subsided after the Chinese market bubble burst. Earlier in the year bubble indicators had flagged many bond indexes, those bubble indicators subsided throughout August, While this doesn’t rule out further declines, the likelihood of the market falling out underneath us is low.

The Economic Strength Index (ESI), is a proprietary indicator I’ve developed to measure the strength of the economy. It stood at 66% at the end of July (Worst is 0% to Best is 100%), which indicates the economy is not at risk for recession, even if it isn’t the strongest it ever has been. We’ll have the final numbers for August at the end of this week.

Overall the past few weeks have been a nice reset for the markets. Even with the continued volatility, we are now much more likely to begin see new market trends develop, rather than most markets moving sideways as has been the pattern for most of this year.